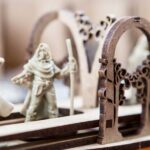 25 years of Magic and more: the history of the most famous CCG

When Richard Garfield came up with a new card game in 1993, he had no idea what it would trigger all over the world! Perhaps, however, Wizards of the Coast had already sensed something in deciding to publish it and we know well how this company knows us and our passion for games.

Fact is, that today Magic the Gathering is THE game of collectible cards par excellence, the undisputed progenitor of the genre and point of reference for all the CCGs that came later.

27 years of history for a total of about 20 thousand unique cards, a number that continues to grow with the expansions of the base game (four per year of at least 200 cards, mixing new editions and reprints) and special sets, which propose ways of alternate games such as Commander, Planechase, Archenemy and Conspiracy.

The game has drastically evolved over its long history by adding new mechanics and refining the rules, to the point that a veteran could feel lost in resuming his deck after a few years of stop!

Magic’s heart remains unchanged: you are a powerful wizard, or a Planeswalker, who duels with his opponents by throwing spells thanks to the mana at his disposal.

Creatures, Artifacts, Instantaneous, Sorceries, Spells, Lands and Planeswalker (yes, you are a Planeswalker who can play Planeswalker … you get used to it after a while) are the blocks for building the deck, aka Grimoire, and structuring your own personal strategy for defeat opponents.

There are five colors of mana and Magic cards, which correspond to as many game archetypes:

• White, which summons vast armies of Creatures that support each other;

• Blue, which maintains control in the field by using counter-magic;

• Green, which aims to rapidly deploy the strongest Creatures;

• Black, who eliminates the opposing Creatures and takes his own from the Graveyard;

• Red, who deals as much damage as quickly as possible.

From these five basic concepts, an infinite number of variations, combinations and strategies are born, giving life to a game with deep tactical implications… Careful planning that is punctually made in vain by TAKING THE FIFTH LAND OF THE ROW! But being at the mercy of fate is part of the game, like it or not.

Now, from this summary picture a simple fact clearly emerges: Magic has maaaaaaaany cards and it is always a tragedy to keep them in order.

This is why we at The Dicetroyers have decided to create products dedicated to the world of CCG, both to keep your collection in style and to take your Grimori everywhere!

Our Organizer for Magic the Gathering is designed to accommodate sleeved cards (as it should be) in six deck holders and in a series of additional compartments, which can also be used for tokens and dice: the indicative capacity is 1030 cards with sleeves of 60 microns and 810 cards with 100 micron sleeves.

The six housings are rotating and removable, to offer better accessibility, and are characterized by symbols that recall the five Magic colors plus a sixth to indicate the multicolor, to make it easier to divide your collection: a similar decoration is also present at the outside of the Organizer to offer an extra touch of aesthetics.

To favor the portability and protection of the Grimoire instead, we have developed a deck holder dedicated to the CCG with snap lid.

If you want to meet the problem of keeping the cards unsleeved, you can lodge up to 330, instead the capacity reaches 280 cards with 40 micron sleeves, 250 with 60 micron sleeves and 190 with 100 micron sleeves: in an average situation you can then carry 4 Standard 60-card decks or 2 Commander 100-card decks with maximum safety and comfort.

To facilitate the division of decks and cards, the deck holder is equipped with 8 dividers, which can be freely removed and repositioned to better adapt to everyone’s needs.

Since the eye also wants its part, the deck holder is decorated on the outside and you can choose between two variants, Cherry for a more retro and refined style or Crate for a modern and dynamic effect.

Discover the other products dedicated to the CCG and contact us for any request or question!