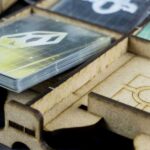 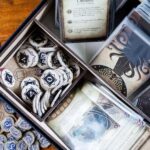 Find order in madness with the Arkham Horror Organizers 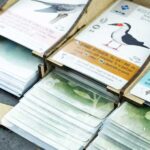 Dominate trading in Puerto Rico with our Organizer

With the discovery of America, the New World was the meeting point of many interests and strong colonial rivalries, to establish dominion over this virgin land and monopolize trade to the Old Continent.

In Puerto Rico these ancient rivalries are revived, putting players, who hold the role of local governors, against each other, to achieve victory thanks to shrewd commercial strategies and careful management of resources.

Each governor has his own territory, represented by a separate board from the main one, where he can build buildings and cultivate plantations; in common are the ships to ship to Europe and the trading house, as well as money and resources.

On every turn, each player chooses a role from those available, which allows all other participants to perform a specific action, while offering a greater advantage to the one who has chosen it.

Using these skills, players will have to grow crops, build, manage labor and ship goods to Europe, earning points to win the ultimate victory.

The ability to change roles at each turn, also rotating the player who starts first, offers variability and strategic depth, encouraging the selection of roles that have not been previously chosen with an economic reward.

But don’t worry: our Organizer for the game comes to the rescue of the new governors of Puerto Rico!

The Organizer is compatible with the new Puerto Rico edition and is therefore able to optimally accommodate the expansions The Nobles and New Buildings.

Going into the detail of the Organizer, we have chosen a solution with numerous separate trays, which can be hooked and unhooked from a large base: this has engravings that divide the surface and indicate the location of each container, for maximum order and space optimization.

Considering that Puerto Rico is designed with different configurations based on the number of players, we have created containers that collect and divide the game elements according to the required setup: the shapes engraved on the front indicate which container to take, significantly speeding up game preparation.

Specifically, we have prepared a box with three slots for victory points, one with four trays for settlers and red noble pawns, and another for plantations and quarries, with front space for token placement.

The doubloons are stored in a container with a gate opening for easy access to the pieces, while a box with 18 slots allows you to collect and divide all the different types of buildings.

A token holder accommodates the ship tiles, those of the large buildings and those of the roles, while a box with five slots divides the tokens of the barrels, using a gate opening for easier access to the pieces and showing on the bottom of each of the compartments engravings the symbol of the corresponding resource.

Now shut up, set up and ship to Europe!