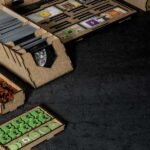 How do we create our Organizers?

Live your life in the Great Lakes with Wendake: discover the Organizer and Game Bundle

The Canadian Great Lakes Region was the home of many Indian tribes, who had to defend their land and their traditions from the interference of the settlers: one of them, the Wyandot, found themselves in the midst of the Seven Years War between the French and English, fought in the territories called, in native language, Wendake.

And it is in the land of Wendake that the homonymous board game develops, a strategic game of resource management, agriculture, construction and even fight.

This last element, however, is not the main mechanic of Wendake, who focuses more on the life of the natives, between the sedentary villages and the surrounding nature: by managing all aspects of the daily life of her tribe, different types of points are obtained, namely Economic, Military, Rituals and Masks to grow your own settlement.

The player most capable of planning his actions and exploiting his resources will be the one to conquer victory and become the Chief of the Tribes, in a game where luck really matters little.

The game box is packed with elements, with four game board segments printed on both sides, and four player boards, each shaped to accommodate action tiles, markers and reserve units.

Lots of colored wooden meeples animate the game board and allow you to keep track of your resources, to which are added 43 action tiles for each player, progress tiles, two decks of cards, Squaw and Hunter tokens, and a large variety of tokens.

With all these elements, the set up is laborious, but do not worry, because the Wendake Organizer offers the perfect solution for you!

Our Organizer, in fact, contains four boxes in which all the game components are collected, thus separating them by color and saving the effort of having to divide them at the beginning of each game: each player will have all the meeples, tokens and tile he’ll use during the game ready to go.

Resources are housed in a resource box with six slots and easy-pick system, which makes them easy to take without running the risk of them scattering around the box or table.

Finally, the main box houses the tiles, tokens, cards and meeples necessary for the preparation of the game board, separating them with housings based on the set up phases so as to make it faster.

The bottom of each of these housings and containers has engravings on the bottom that show the game element it is intended to accommodate, facilitating their organization and embellishing the Organizer.

In short, if you already have Wendake, you must not miss our Organizer, to speed up the preparation of the game and have more time to live life among the Great Lakes!

You don’t have Wendake yet, but did this article make you want to lead your own tribe? We at The Dicetroyers offer you an exclusive bundle that combines the Wendake boardgame and its Organizer at an extremely advantageous price!

Shut up, set up and be the Chief!