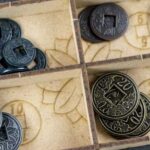 In harmony with nature and forest: the wooden Organizer for Tang Garden

1 Terra Mystica, 14 races all in One Organizer!

Be Prepared to survive: with the Organizer of This War of Mine

Multiclassing is not always easy, but it gives a lot of satisfaction: how to compete with the power of a Mage Knight, with a sword in one hand and a bolt in the other?

A board game entitled Mage Knight, therefore, certainly arouses interest for the lover of both board games and fantasy, and this curiosity is well justified.

First, Mage Knight is itself a very hybrid title: the heart is a deckbuilding, but it is supported by different mechanics typical of exploration games, with boxes, tokens and dice rolls, and of RPGs, with levels, rewards and struggles, with a pinch of strategy in managing your resources.

Mage Knight can be played in solo, in cooperation or in competition using the different scenarios available: one to five players will take control of one of the heroes and set out to explore the world.

Over the course of their adventures, they will grow stronger and stronger by acquiring spells, artifacts and allies, and by enriching their deck after conquering or exploring campaigns in cities, caves, dungeons and towers.

This mix has met with great success with the public to the point that three expansions have been released: Krang, The Lost Legion and The Shadows of Tezla, then collected in an Ultimate Edition which also includes the base game and exclusive content.

Mage Knight Ultimate Edition is definitely a treasure for board game fans, full of content and potential … And the nightmare of anyone who has to set up the game and then put everything back in order in the box!

The basic edition alone has 240 cards (divided into different types), 8 miniatures, 196 tokens, 20 map tiles, 54 crystals and 7 dice, in addition to the new game elements and the new mechanics of three expansions!

For this reason, we suggest you add a third class to your Mage Knight: the organizer.

The Organizer for Mage Knight Ultimate Edition certainly represents one of our most complex challenges, which we have tackled by expertly fitting boxes, trays and racks to fit everything into the original box!

Let’s start with our heroes: each of the seven Mage Knights have their own ‘palace’, a dedicated structure for their miniature (fixed with a rail system) and their resources (tokens and cards) decorated with their emblem and with a colonnade which supports and suspends the housings.

A rack decorated with columns, towers and palaces houses the miniatures of the cities and the set of General Volkare.

A box with six slots and a slide closure allows for quick sorting and access to counters and mana crystals.

The 377 cards of the Ultimate Edition can be sleeved and placed in two card holders with dividers, so as to separate them by category: the indications engraved on the side of the package allow you to immediately understand where what you are looking for is.

We have also prepared a special game board for a quick setup: the fame and day / night board is accompanied by indications for inserting spell cards / advanced actions / offers and slots for dice holders and turn order tokens; this dice holder divides them by day and night, and serves as a platform for their throwing.

Last, but not least, the game map tiles find a dedicated housing, which protects and contains them with shaped walls, but which allows them to be easily extracted: here the avatar of The Shadows of Tezla also finds space.

For those who have only the base game, we have an Organizer for Mage Knight designed on the minor contents of that edition.

Now shut up, set up and cast spells!