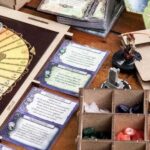 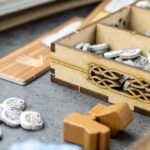 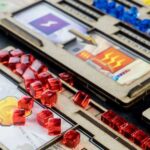 Terraforming Mars is a strategic game in which players, up to five, represent corporations which have the aim to get the Red Planet inhabitable: their joint efforts will pave the way for the future of the human race on the red planet, but only the one that has collected the most points in the during the game rounds will manage to win the game.

Terraforming Mars combines a fascinating setting with intriguing and profound game mechanics, and this combination has met with great success among critics and fans, giving the game a well-deserved fame and numerous awards.

The charm of this board game also struck us at The Dicetroyers and for this reason we have studied different solutions to make the gaming experience even more enjoyable by making it easier and faster to organize the numerous components in the box and their set-up for the match.

So we started with the first version of the game without expansions with the Terraforming Mars Organizer: five player boards, a deck box with five slots, a storage box, a resource container (divided by copper, silver and gold), and a box for the other components.

All these elements fit perfectly into the original box, ensuring flush closure even with sleeved cards.

The results obtained with player boards have particularly pleased us: they have been designed for the insertion of the game cards into spaces divided by single productions and reserves, and with slots for the player cubes, so as to allow an instant start of the match and a clearer and more orderly display of the elements. For this reason we have also made them available for purchase separately!

We then created other boxes and slots, always keeping clear what goes where thanks to the engravings on their surfaces, for the base game plus Prelude, Venus Next, Hellas & Elysium, Colonies and Turmoil, with or without boards.

Our efforts allowed us to minimize the space between the bottom and the top to just 1.5 centimeters, but this may not be enough for lovers of order.

No fear! We have created a lifted base, decorated with the hexagons that characterize the game board, which allows you to accommodate all the components of the Terraforming Mars + Expansions Organizers and to use the original lid of the box to obtain a flush closure.

And let’s not forget the bundles and Organizers for the first three expansions: discover all our solutions for Terraforming Mars!

Now shut up, set up and terraform Mars!